The INMARSAT system allows rapid communications between a ship and a land station or between ships. Communications is by voice or teletype; distress calls and messages can also be initiated. The system consists of four satellites in geosynchronous orbits (each satellite is over a fixed point on the earth’s equator). One satellite is over the Indian Ocean, two over the Atlantic Ocean, and another over the Pacific Ocean. Coverage by these satellites is worldwide, except in the Polar Regions, where ship can not sail anyway. Many countries have a land earth station in communication with at least one satellite. Ship earth stations have a means of pointing their antennas toward a satellite and compensation is provided for changes in the ship’s heading and also for pitching and rolling in heavy seas.

Voice communications are initiated by dialing, very much like dialing long distance telephone calls on a landline. The INMARSAT system is integrated with the landline telephone networks. Each ship has its unique station number for receiving calls.

For teletype messages, the text is first entered via keyboard on to a monitor; it may also be printed if desired. When the message is sent, the receiving station can display it on a monitor and/or print it. Pressing a button (well guarded to prevent accidental initiation) will initiate a distress call that goes directly to the search and rescue authorities. 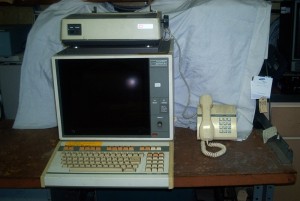