On a chart, the reciprocal (differing by 180 degrees) bearing from two or more of the buoys or land marks can be drawn; own vessel is at the intersection of the lines. 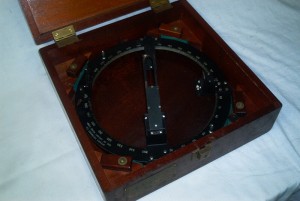 Manufactured by: The Eastern Specialty Company

A sextant is a measuring instrument generally used to measure the angle of elevation of a celestial object above the horizon. Making this measurement is known as sighting the object, shooting the object or taking a sight. The angle, and the time when it was measured, can be used to calculate a position line on a nautical or aeronautical chart. A common use of the sextant is to sight the sun at noon to find one's latitude. Held horizontally, the sextant can be used to measure the angle between any two objects, such as between two lighthouses, which will, similarly, allow for calculation of a line of position on a chart.

The sextant is not dependent upon electricity (unlike many forms of modern navigation) or anything human-controlled (like GPS satellites). For these reasons, it is considered an eminently practical back-up navigation tool for ships. 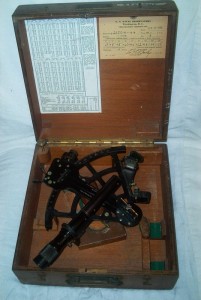