The earliest soundings were probably by lowering a pole into the water to touch bottom. The greatest practical depth by this method is not much more than 20 feet.

Next would have been a stone, or better, a lead weight, tied to a rope. The greatest practical depth to be measure would be perhaps 300 feet.

All electrical depth sounders operate by transmitting a short pulse of sound, then listening for the echo from the bottom. The time between transmitted pulse and the echo is interpreted as depth.

Early electrical depth sounders utilized a rotating dial with a neon lamp. The echoes were amplified and applied to the neon lamp, causing a flash. The displacement of the flash was proportional to the depth, and the dial is marked in units, such as feet, fathoms or meters. Recorders were also used; in this case, the amplified echo is applied to a moving stylus which traces along a moving chart. An electrical impulse applied to the stylus causes the chart paper to turn black, thus leaving a permanent record.

Recorders were installed as an option. Their installation and use was made mandatory after a tanker ran aground in the 1970’s and broke open, spilling its cargo which washed ashore and fouled beaches.

Modern depth sounders use a digital read out.

Fish finders are an adoption of depth sounders. These usually have a means of differentiating a fish near the bottom from a rock or debris lying on the bottom.

Also available are display sounders with either a monochrome or multicolored chart like display, often utilized in fish finder service.

Survey sounders have a means of compensating for tide (level of water above or below mean sea level) and draft (depth of vessel in the water) so that the true depth is recorded. 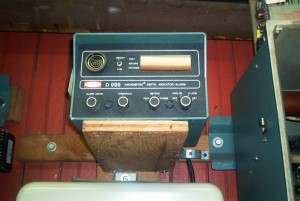 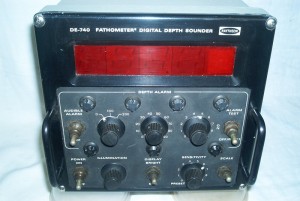 Audible depth alarm can be set between 0 and 299 feet or fathoms. 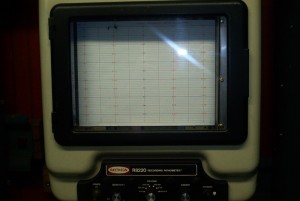