Early mariners did not have a compass. They had to rely on the sun in daytime and the stars at night to determine direction.

The Chinese were the first to make use of a compass. This was magnetic compass, which points to the earth’s magnetic North pole. The material used was lodestone, a magnetic ore of iron. Magnetic compasses, now made using magnetized steel, are widely used.

A gyro compass operates by reacting to earth’s rotational movement and points to true north.  Several repeaters are used aboard ships to provide a true bearing, dial at the steering station, the “wings” on either side of the wheelhouse, possibly the captain’s quarters and engine room. At the “wing” repeaters a bearing circle can be used to determine direction to buoys, a landmark and other vessels. From buoys and landmarks a plot can be made of own position. Gyrocompass data are also sent to navigational aids, such as radar ARPA, radio direction finder, Loran and Transit Satellite Navigator to provide true bearing data. 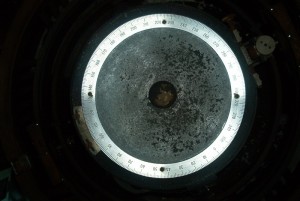 Manufactured by: Dodge Division of Chrysler Corporation for Sperry 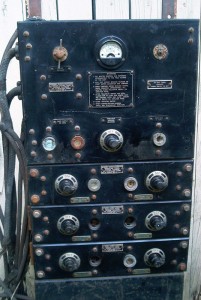 Manufactured by: Chrysler Corporation for Sperry