On ships built before the 1950's (and some after), the electrical power was direct current (DC), often 220 Volts, but some ships had 110 Volts DC.  This power was suitable for running compressor and winch motors and lights.  However few, if any, electronic equipments could use the ships voltage directly.  Hence the need for motor-generators (sometimes called rotary converters).  Often a motor-generator was included in a "package" of electronic equipment, such as radar, gyrocompass or loran.

In the 1950's ships were built with alternating current (AC) electrical systems.  Most often this power was generated at 440 Volts, 60 cycles per second, three phase.  This power is suitable for running large motors, as for winches and compressors; for lights and many electronic equipment the voltage is stepped down by a transformer to 115 or 230 Volts, single phase.  Ships built in Europe and South America tended to generate 380 Volts, 50 cycles per second, three phase.

Beginning in the late 1960's, certainly in the 1970's, electronic equipment used solid state converters, which could accept ships DC or AC power and provide voltage(s) required by the equipment, whether DC or AC. 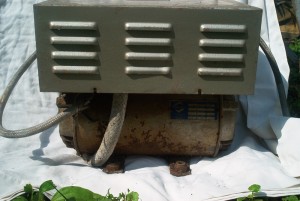 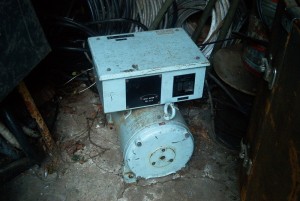