Radar operates by generating a microwave radio frequency pulse and directing it in a narrow beam from a rotating antenna. After the pulse is transmitted the receiver detects the echoes and amplifies them to produce bright spots or areas on the indicator. The time between the transmitted pulse and echoes is interpreted as distance (range) from own ship.

As used aboard ships and other surface craft, radar data are displayed on a plan position indicator, a map like display with own ship in the center. Other vessels, buoys, land masses show up as bright spots or areas on a dark background.

Using a reflection plotter and plotter pencil (similar to a grease pencil), the radar observer can, by successive plots of other vessels, track and calculate the movements of other vessels and assess any risk of collision

Developed for marine usage in the 1970’s

Fittings aboard tankers were made mandatory in 1982, or other classes of ships soon after. On an ARPA the radar observer can designate a “target” ship of interest and the ARPA calculates the speed and course of the ship and assesses the risk of collision. Targets may also be “acquired” automatically and tracked. A number of targets can be tracked simultaneously. A “dangerous” target (one having a risk of collision) will be highlighted and an alarm will sound. On any target being tracked, the closest point of approach (CPA) and time to closest point of approach (TCPA) are calculated and displayed. 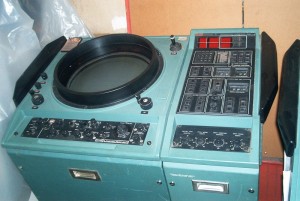